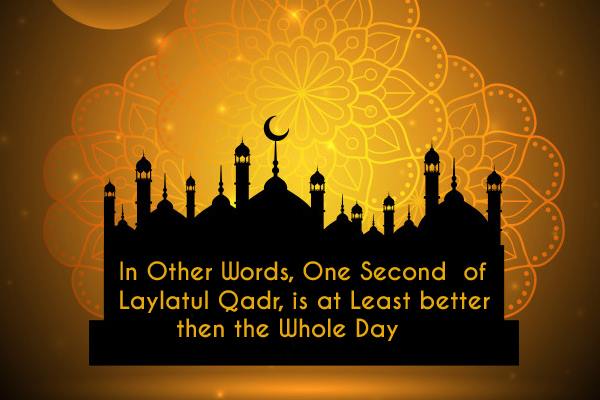 Laylatul Qadr (Shab e Qadr) is the night of Qadr; the Night of Power. Read & Download Duas, surah, prayers, quotes, images, and Hadith for Qadr night before Ramadan 1440. Watch Story with video to explain to you the importance of this night. Laylatul Qadr the Islamic event is starting from 8 May 2021 on the night of Friday for only 1 day in every part of the world. If you are searching for Shab e Qadr ki dua, Namaz, Ibadat, Fazilat, and Nishaniyan, so here is the post for you.

Not only the Ahadith e Nabwii SAWW state the qualities of this night but the Qur’an also talks about it. It is the night when Qur’an was revealed. We ought to recite as much Qur’an as possible in this night. But we shouldn’t try to finish it in one night though. Because it is in a hadith e Nabwii SAWW that:

It was narrated that ‘Abdullah – that is, ibn ‘Amr – said: The Messenger of Allah (blessings and peace of Allah be upon him) said: “No one properly understands who reads the Qur’an in less than three days.”

It was narrated that ‘Abdullah ibn ‘Amr said: The Messenger of Allah (blessings and peace of Allah be upon him) said: “Read the Qur’an in a month.” I said: I am able to do better than that… Until he said: “Then read it once every seven days, and do not do any more than that.”

Here’s what you need to know about this night:

Aisha reported: I asked: “O Messenger of Allah! If I realize Lailat-ul-Qadr (Night of Decree), what should I supplicate in it?” He  replied, “You should supplicate: Allahumma innaka ‘afuwwun, tuhibbul-‘afwa, fa’fu ‘anni (O Allah, You are Most Forgiving, and You love forgiveness; so forgive me).” [At-Tirmidhi].

But remember, we haven’t been told what night this Layl Tul Qadr falls, so recite it every odd night of the last ten nights as much as you can so Allah t’ala can forgive us all. After all, whoever Allah tala forgives readily, what else would we need?

The Night of Decree is better than a thousand months. The angels and the Spirit descend therein by permission of their Lord for every matter. Peace is until the emergence of dawn. [Qur’an: 97:3-5]

About 1400 years ago, a man who was worried what the people around him did every single day, gambling, drinking wine, being intoxicated, worshipping the hand-made; the human-made idols of clay and dirt that were nothing but a piece of production of human, use to take a break away from all that for some time in a cave called Hira in Makkah.

One day, he was in a cave, looking for an answer, calling out to the Lord that suddenly he saw Angel Jibraeel with his 600 wings, mighty and huge.
He said to the man ‘Read.’

Muhammad; the man in a cave, cried and said ‘I cannot read.’
The angel seizes him tightly and asks him to ‘Read’ again. Muhammad (SAWW) replied ‘I cannot.’ The angel tells for the third time: ‘Read’. This time, Muhammad (SAWW) feels different, he asks “What shall I read?”

Read in the Name of your Lord, Who created; created man from a clot of blood. Read! And your Lord is the Most Generous… Who has taught by the pen, taught man that which he knew not.} (Surah al-‘Alaq, Qur’an 96:  1 – 5)

That night was Laylatul Qadr – the Night of Decree, of Power

The Prophet came out to inform us about the Night of Qadr but two Muslims were quarreling with each other. So, the Prophet said, “I came out to inform you about the Qadr but such-and-such persons were quarreling, so the news about it had been taken away; yet that might be for your own good, so search for it on the 29th, 27th, and 25th (of Ramadan).

“The strength of the heart returns when one repents.” – (Ibn e Taymiyyah)

“If the night of Qadr was some night during the entire year, I’d stand in the night prayer the entire year to get it. So what do you suppose should be done for merely ten nights?” – Ibn Ul Qayyim says: 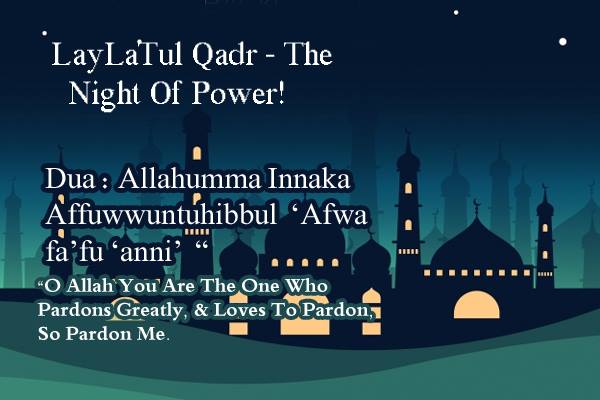 “If one misses this year’s Layl tul Qadr, he misses the ibadah of one thousand months! And who knows this could be one’s last Ramadan!!” – (Source unknown) 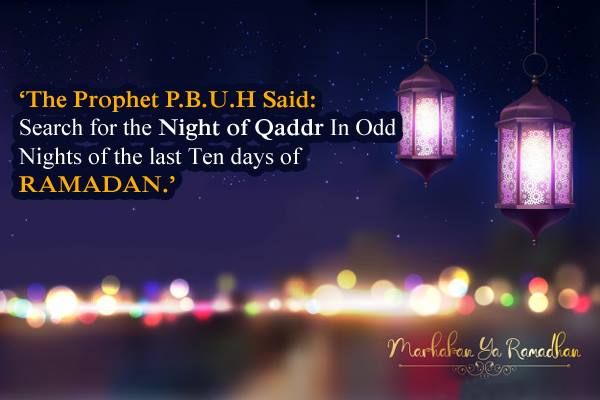 Aisha reported: With the start of the last ten days of Ramadan, the Prophet used to tighten his waist belt (i.e. work harder) and used to pray the whole night, and used to keep his family awake for the prayers. [Bukhari] 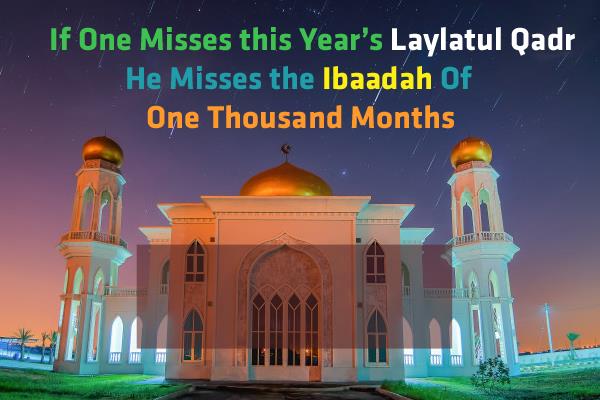 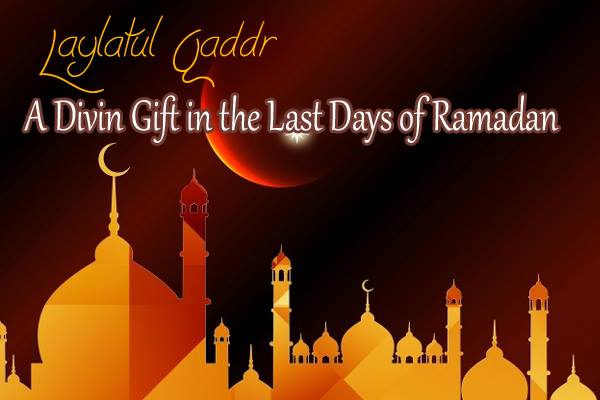 “Oh, Allah you are the one who pardons greatly, and loves to pardons, so pardons me.”

“The night of degree is better than a thousand months.” 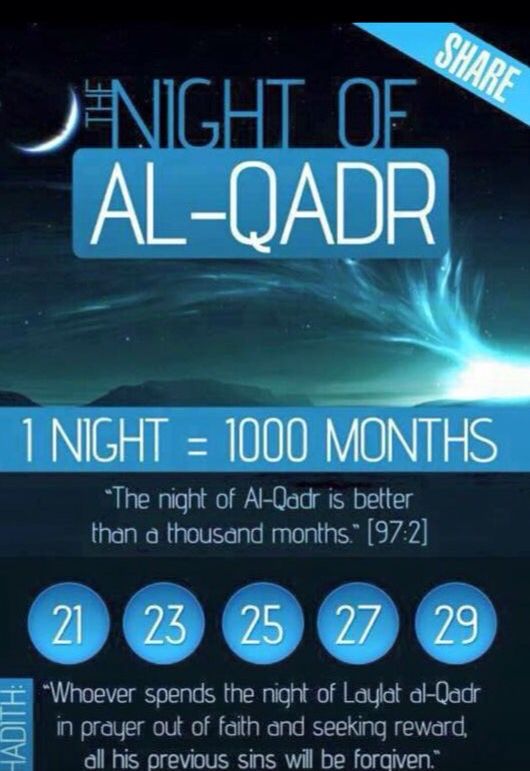 “Look for the Night of Qadr in the last ten nights of the month of Ramadan.”

Night of blessing, the night of noor
welcome the odd nights
one of which is Shab-e-Qadr.

“He makes the water to descend from the sky,
so that it fills the valley according to volume.”

“This is also the night of honor, and prestige that faithful servant rewarded. Multiply all the things of God’s mercy.”

“Whoever spends this night in prayer out of faith and in the hope of reward will be forgiven his previous sins.”

The night of Glory, the glorious night that brings glory to the Muslims.

“Prepare your Mind, Soul, and Body for the Night of Shab-e-Qadr”

Read Ramadan Quotes and greetings on home page of website. 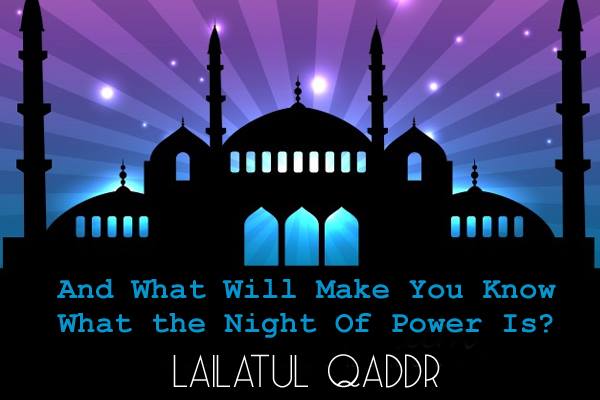 “He replied in the affirmative and said, “Once we were in Itikaf with Messenger of Allah’s in the middle ten days of (Ramadan) and we came out of it in the morning of the twentieth, and Allah’s Apostle delivered a sermon on the 20th (of Ramadan) and said, ‘I was informed (of the date) of the Qadr (in my dream) but had forgotten it. So, look for it in the odd nights of the last ten nights of the month of Ramadan. I saw myself prostrating in mud and water on that night (as a sign of the Night of power). So, whoever had been in Itikaf with Allah’s Apostle should return for it.’ The people returned to the mosque (for Itikaf). There was no trace of clouds in the sky. But all of a sudden, a cloud came and it rained. Then the prayer was established (they stood for the prayer) and Allah’s Apostle prostrated in mud and water and I saw mud over the forehead and the nose of the Prophet.”