Shab e Miraj is going to celebrate on 23 March 2020 this year and 27th Rajab each Islamic year. We have listed Shab-e-Miraj Quotes, Nawafil Namaz guide to follow for every Muslim. Also written about Miraj Story and Quran sayings. This Holy day is celebrated the same date for each country including USA, India, Pakistan, UAE and other.

For the Muslims, Shab e Miraj is one of the most sacred nights. This night, the Prophet Muhammad PBUH was ascended to the Heavens. For this reason, Shab e Miraj is also called the Night of Ascent. Various other reports have also used the term ‘Night of Journeys” Shab e Miraj because Holy Prophet PBUH travelled to the Heavens throughout the night and then came back. Move to any section of the post with the below list.

When it comes to Shab e Miraj date, 27 Rajab night of every year is observed as Shab e Miraj among the Muslims according to the Islamic calendar 2020 (also called Hijri Calendar). In the Gregorian calendar, the date changes every year. In 2020, the night of 3 April is Shab e Miraj or the Night of Ascent. This night, the Muslims will offer prayers, recite Holy Quran, offer Nawafil and spend the night while praying to ALLAH. It is believed anything requested in prayers this night is accepted. 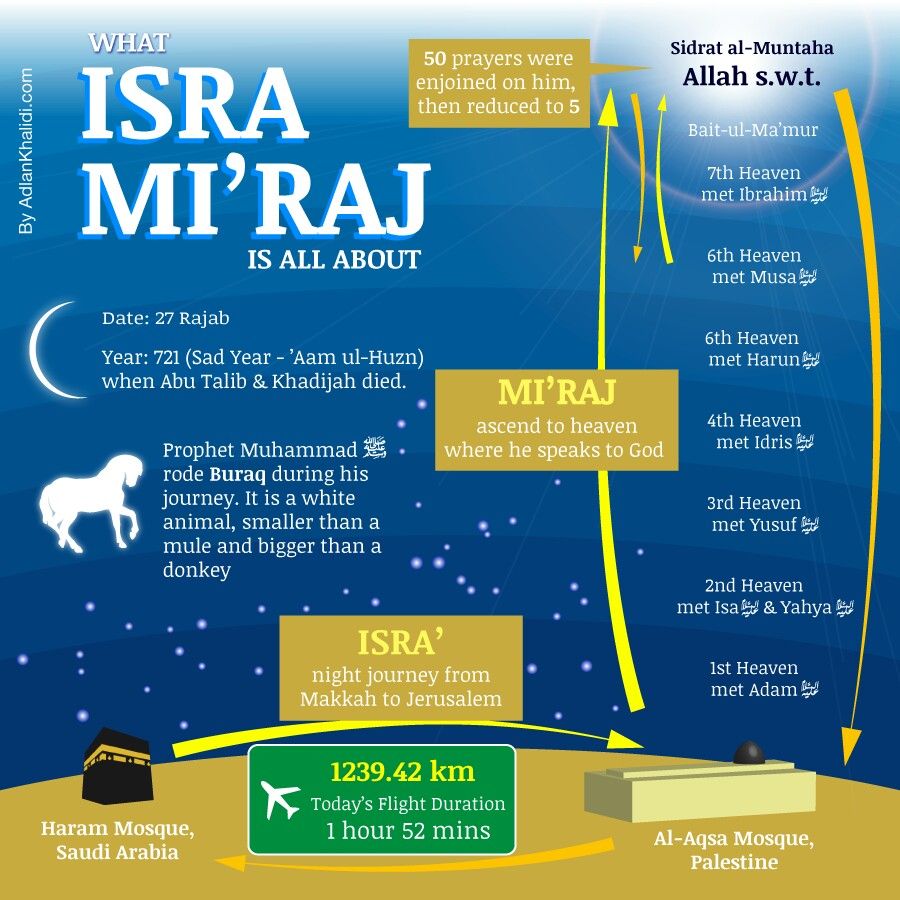 The Ibadat, prayers as well as recitation of the Quran, are the true essence of this night. Since the day Prophet went to the Heavens, this night has become of great significance for the Muslims. It was a moment of great joy for the companions of the Prophet. Since then, the Muslims spend this night while offering prayers and strengthen their bond with ALLAH.

The scholars and Muslims leaders put great emphasize on Ibadat. There are a number of reports associated with Ibadat of this night. According to one report, any Muslim who spends Shab e Miraj while offering prayers will have a heart full of happiness and peace. One other report reveals people who spend Shab e Miraj in prayers will be honoured on the Day of Judgement.

One quote of Hazrat Salman Farsi RA is mentioned here. According to him, the Prophet said that any Muslim who spends Shab e Miraj while doing prayers and reciting Quran will be honoured with blessings of offering prayers of 100 years and fasting of 100 years.

Without any doubt, it can be asserted that Muslims should do their best to offer prayers and spend most of their time in mosques. You can also do Ibadat at home. But it is advised the night and morning prayers should be offered at mosques with other Muslims.

In short, Ibadat during this night is the special thing for Muslims apart from the importance of the night. Shab e Miraj is a gift of Allah for the Muslims. It has been 14 centuries but the Muslims still celebrate this night of their Prophet.

Nawafil in Islamic term is the special prayers in the form of Namaz. They are not obligatory but are recommended for the Muslims to offer whenever they have time. For this night, Nawafil becomes even more important and more valuable. The offer for Nawafil to be offered this night is manifold. 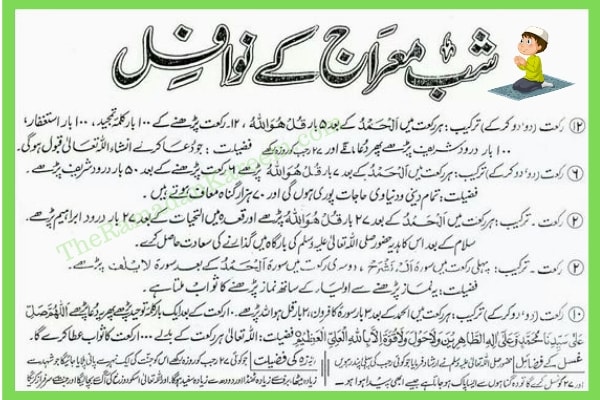 According to one report that is commonly accepted among Muslims, it is advised that you should offer 12 Rakat of Nawafil. You can offer as 2,2 or 4,4. There are no hard and fast rules regarding this. Recite Subhan ALLAH 100 times, ASTAGHFIRULLAH RABI MIN QULI ZAMBI WA ATUBU ALLAH 100 times and DAROOD SHARIF 100 times as well. With this practice, you will get whatever you ask for from ALLAH this night.

This shows that how beautiful the night is. ALLAH encourages His people to come close to him and He will reward them 100 times more than they expect. Night of Ascent when the Prophet Muhammad PBUH was sent to the Heavens and met all the prophets of ALLAH has gained immense popularity. Muslims throughout the world wait for this night and celebrate it in the form of prayers.

One night prayer of Miraj is equivalent to the prayer of 100 years. Prayer in Shab-e-Miraj is also cleared and proved in the Hadeeth. Hazrat Muhammad (SAW) said

“The one who does Ibadat and Amal in the night of Miraj. He will be awarded by virtues equivalent to 100 Years”.

Whoever does 12 Rakat prayer in this night of Miraj & recite the Surah Fatihah in every Rakat. After every 2 Rakat recite Tashud and finish the Salat with Salam.

After doing the above process recite the following ayat:

After that recite: “Astagfirullah” 100 times & than recite any Durood Sharif 100 times.

Now make Dua after performing all the process. Your all DUA will be accepted except that DUA which is made of sins.

After offering the 12 Rakat Prayer do any of following Tasbeeh that you find easy:

You can offer this Tasbeeh in 4 Rakat of Zohar prayer on 27 Rajab:

No other religion in the world encourages its followers this way. The Muslims are proud that their religion encourages them for the good deeds, sacrifice and taking care of the others. But this night has been dedicated to the prayers and offering.

As Shab e Miraj approaches, the Muslims send messages and SMS of respect and felicitations. They also share quotes from Quran and Hadith. Any other relevant quotes from scholars can also be shared.

However, it should be noted this night has a status of the most respected and the most sacred nights for the Muslims. They leave everything, prepare for the night. Take baths, wear clean clothes, and attend prayers at mosques. Social media is also full of celebrations and prayers for the night.

Shab e Miraj refers to the Prophet’s Night Journey and Ascent into heaven. It is one of the greatest signs of Allah which points to the importance and truthfulness of His Messenger Muhammad (P.B.U.H), and his status before Allah.  Some important verses and saying about this night are given below. Give a careful read and share with others.

“Glory to Him who made His servant travel by night from the sacred place of worship to the furthest place of worship, whose surroundings We have blessed, to show him some of Our signs: He alone is the All-Hearing, the Seeing.”

“Today I have perfected your religion for you, completed My blessing upon you, and chosen as your religion Islam [total devotion to God].”

In another verse of the Holy Quran, the details about Miraj stated in these words of Allah SWT:

“It was taught to him by [an angel] with mighty powers and great strength, who stood on the highest horizon and then reproached—coming down until he was two bow-lengths away or even closer— and reveled to God’s servant what he revealed . The (Prophet’s) own heart did not distort what he saw. Are you going to dispute with him what he saw with his own eyes? A second time he saw him: by the lote tree beyond which none may pass near the Garden of Restfulness when the tree was covered in names [splendor] His sight never wavered, nor was it too bold, and he saw some of the greatest signs of his Lord.” (Quran, 53:7-18)

It was narrated that ‘Aisha (may Allah be pleased with her) said: “Whoever told you that Muhammad (P.B.U.H) saw his Lord was lying. He said that no vision can grasp him” (Narrated by al-Bukhaari, al-Tawheed, 6832).

“Nothing in this world can change your Luck, except Dua to Allah.”

“If you want Allah than do such deed that enforces someone to make Dua for you.”

“Shab-e-Miraj is the night of forgiveness. Ask for Allah’s Mercy on this Blessed Night”

Shab-e-Miraj is a night of blessing when the Angels Celebrate Eid in the Jannat. Be the part of this night and say as many prayers as you can.

The significance of this Powerful Night in Islam

For Muslims, this night has become of immense respect and a time to rebuild their broken connections with ALLAH. In other words, the Muslims bow down before ALLAH, follow His orders, respect the importance of Shab e Miraj and strengthen their belief.