Taraweeh Dua: Do you want to read and remmber Dua e Taraweeh in arabic, urdu, english and hindi? and we have shared audio mp3 as well for all muslims. The word “Taraweeh” is an Arabic word. Its literal meaning is “rest or relax”. It is one of the important segments of Ramadan. During this blessed month, Muslims gather in mosques to offer Tarawih and to listen to Quran recitation. Taraweeh is considered a highly spiritual and precious experience for Muslims. This dua is recited after 4 rakat in Namaz of Tarvih.

There is no authentic hadith that report Taraweeh Dua but the below-mentioned Dua is recommended by various Islamic Scholars. You can recite this Dua but don’t consider it compulsory because considering anything compulsory that is not mentioned in the Quran, hadith or Sunnah is called Bid’ah which is strictly prohibited in Islam. 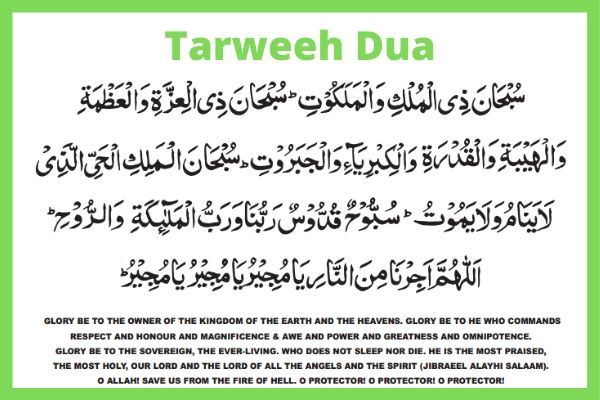 Taraweeh in the Quran

Allah SWT says in the Quran;

“And the servants of the Most Merciful are those who walk upon the earth easily, and when the ignorant address them [harshly], they say [words of] peace. And those who spend [part of] the night to their Lord prostrating and standing [in prayer].”

Allah SWT highly appreciates and rewards the night prayers. He says distinguishes those who pray at night from those who don’t establish prayers at night by saying;

“Is one who is devoutly obedient during periods of the night, prostrating and standing [in prayer], fearing the Hereafter and hoping for the mercy of his Lord, [like one who does not]?”

Emphasizing on the importance of Taraweeh, Prophet Mohammed (P.B.U.H) said:

“Whoever performs the Taraweeh prayer by believing in the virtue of Ramadan and asks for the divine rewards earned only from Allah, his prior sins are erased.”

Urwa narrates that he was informed by `Aisha, “Allah’s Messenger (P.B.U.H) went out in the middle of the night and prayed in the mosque and some men prayed behind him. In the morning, the people spoke about it and then a large number of them gathered and prayed behind him (on the second night). The next morning the people again talked about it and on the third night, the mosque was full of a large number of people. Allah’s Messenger (P.B.U.H) came out and the people prayed behind him. On the fourth night the Mosque was overwhelmed with people and could not accommodate them, but the Prophet (P.B.U.H) came out (only) for the Morning Prayer. When the Morning Prayer was finished he recited Tashah-hud and (addressing the people) said, “Amma ba’du, your presence was not hidden from me but I was afraid lest the night prayer (Qiyam) should be enjoined on you and you might not be able to carry it on.” So, Allah’s Apostle died and the situation remained like that (i.e. people prayed individually). ”

How to pray Taraweeh?

Unfortunately, most of the Muslims don’t know how to pray Taraweeh. Some of us are familiar with this prayer but commit mistakes while praying it. Here is a proper way to pray Taraweeh;

How to pray Tarawih at home?

If you are praying Taraweeh at home then follow the below-given steps;

How many rakats in Tarawih?

The prayer Taraweeh has 20 rakats of 2 each. After 4 rak’ah, Taraweeh Dua and salutations are recited.

Is Taraweeh Sunnah or Nafl?

Taraweeh Prayer is not Fardh (compulsory) or Wajib (obligatory) but from hadith, we have concluded that it is Sunnah.