The Day of Arafah occurs on the 9th day of Zil Hajj of the Islamic Calendar. This day is the concluding event of the Hajj Pilgrimage. The day after this event is known as the Eid al-Adha, a joyous and important event for all Muslims. Since the Islamic calendar is based on the lunar calendar, the date of this day changes every year. Muslims all around the world take or are given holidays during Hajj so that they can spend all their time and energy on worshipping Allah (SWT). This way they remain with their brother and sisters in spirit, who perform the pilgrimage in Makkah.

The day, for the pilgrims, is mostly spent on Plain of Arafah. The importance of this location can be seen from the belief that this was where the Holy Prophet (peace be upon him) gave his last sermon to the Muslim Ummah, where he said; “This day I have perfected for you your religion and completed My favor upon you and have approved for you Islam as religion.” (Surah al Maa’idah 5:3). It is on the Plain of Arafah that the whole of mankind will be gathered on the Day of Judgment. On this day, Allah (SWT) swore an oath. It is the day of forgiveness and atoning for sins and freedom from the Fire of Hell.

Customs and Rituals of the Day of Arafat

At dawn, all the pilgrims move from Mina to Mount Arafah, which is located east of Makkah. Before noon, all the pilgrims are gathered there. They then perform prayers, atone for their sins, make Dua, seek mercy for Allah (SWT) and also listen to sermons from scholars. At noontime, pilgrims move on to the Namrah Mosque, where they perform the prayers of Zhuhur and Asar together. This period is known as “Standing Before God”, and ends at sunset upon the performing of the prayer of Maghrib. Such is the importance of these rituals that without it, a pilgrim’s Hajj is considered invalid.

FASTING on this Hajj Day

It is recommended that those who don’t perform the pilgrimage, or can’t perform it for some reason, then they should fast. The Holy Prophet (peace be upon him) said: “Fasting on the Day of Arafah expiates the sins of the past year and the coming year.” (Muslim). This Hadith has been narrated by Abu Qatada al-Ansari. It reflects the importance of fasting on this important day 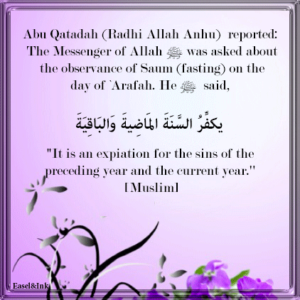 Those involved in the pilgrimage itself are to necessarily required to fast since they are already involved in the most important form of worship anyway. Imam at-Tirmidhi said, ‘The people of knowledge consider it recommended to fast on the day of ‘Arafah, except for those at Arafat’.

Furthermore, not only fasting on the Day of Arafah is the highest form of worship, which is further made rewarding considering the importance of the day, it is also a Sunnah. This is evidenced by the Hadith narrated by Abu Dawood; The Holy Prophet (peace be upon him) used to fast on the first nine days of Zil Hajj and the day of Ashura, and three days each month, the first Monday of the month and two Thursdays.”

Hadith With Regards to the Day of Arafat

The importance of the Day of Arafah can be highlighted with this Hadith: It was narrated from Hazrat Aisha that The Holy Prophet (peace be upon him) said:

“There is no day on which Allah (swt) frees more people from the Fire than the Day of Arafah. He comes close and expresses His fulfillment to the angels, saying, ‘What do these people want?” (Sahih Muslim).

Another Hadith highlights that performing the required rituals of the Day of Arafah is synonymous to the Hajj itself; “Hajj is Arafah” (Abu Dawud).

The following Hadith highlights the magnificence of this day; 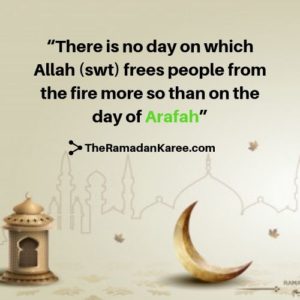 “There is no day on which Allah (swt) frees people from the fire more so than on the day of Arafah” (Muslim).

The Holy Prophet (peace be upon him) also explained the significance of the first 20 days of Zil Hajj;

“On this day, Allah (swt), the Most Exalted, descends to the nearest heaven, and He is proud of His servants on the earth and says to those in heavens, look at My servants, they have come from far and near, with hair disheveled and faces covered with dust, to seek my Mercy. Even if their sins are as much the sand or the froth of the sea, I shall forgive them.”

Duas to Recite on Arafah: 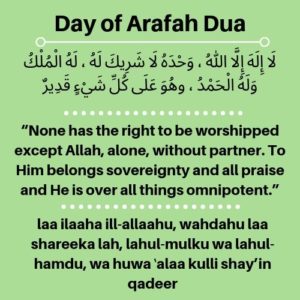 The best dua for the Day of Arafah is the Dua of our Holy Prophet (peace be upon him);

“The best supplication is the supplication on the Day of ‘Arafah and the best of what I and the Prophets before me have said is: La ilaha illallahu wahdahu la shareeka lah, lahul-mulku walahul-hamdu wahuwa ‘ala kuli shay-in qadeer.”

The translation of this dua is:

“There is absolutely no god worthy of being worshipped except Allah, Alone, without any partner. To Him belongs the Kingdom, and all praise is due to Him, and He is Powerful over everything” (Tirmidhi).

It is important to remember that any form of dua, be it reading the Holy Quran or reading Tasbeeh, is sufficient, as long as there is the intention to please Allah (SWT). A particularly sacred dua is;

“SubhanAllahi wa bihamdihi, SubhanAllahil Adheem” (Glory be to Allah and all praise is due to Him). Moreover, it is a Sunnah of the Holy Prophet (peace be upon him) to recite the Tahleel, Takbeer, and Tahmeed as many times as possible on this day.

Summary
Event
​DAY OF ARAFAT 2020
Location
​ Makkah, Saudi Arabia, Arafat,KSA,Arab-21750
Starting on
August 10, 2019
Ending on
August 11, 2019
Description
The Arafah is an important part of Hajj and Mount Arafat is the main thing to do from every Hajji.