Do you want to perform Itikāf in Ramadan Kareem? If yes! Then do the Niyyah in your heart to perform i’tikaf and get your vow with God done. Don’t know about it? Want to learn about I’tikaf? Let’s have a detailed look to understand the significance of i’tikaf in the month of Ramadan. There are rules for females and males.

The word i’tikaf belongs to Arabic origin which means to isolate oneself or adhere to something. In Ramadan Kareem, many Muslims perform I’tikaf by spending the last 10 fast’s days and nights in mosques by isolating themselves from people and the matters of the world while sticking to Ibadah.

Itikaf is a way to cure the wounds of the soul. Allah has blessed us with the month of Ramadan and then in Ramadan, he bestowed us with Itikaf for our spiritual retreat. Whenever Ramadan is mentioned anywhere, the discussion will never be completed without pointing the holy ritual i’tikaf out.

It is performed in the last 10 days of Ramadan which are dedicated to the freedom from hellfire as well as the night of Qadar is also present in these days. Laylat ul qadar is the night on which God had sent down the Quran-e-Hakeem from heavens to our Prophet (PBUH). The night which is better than 1000 other nights.

So, doing i’tikaf in the last Ashra of Ramadan will definitely bring closeness in your relationship with God. Hazrat Ayesha R.A narrated:

The thawab of performing i’tikaf is also boundless. As it is narrated that Nabi (SAW) said:

“He who observes the ten days Itikaf during Ramadan will obtain the reward of two Hajj and two Umrah.” (Bayhaqi)

So are you ready to avail the cost-free option to earn the thawab of Hajj and Umrah? 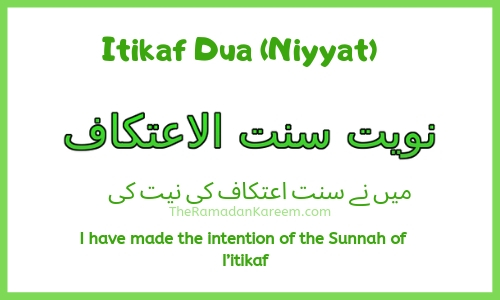 “With the Blessed Name of Allah have I entered (into the Masjid) and in Him have I placed my trust, and I have made the intention of the Sunnah of I’itikaf. O Allah open Your doors of Mercy upon me.”

There are three types of I’tikaf according to Islam.

The Nafl I’tikaf can be performed on any day or night of the year depending upon the will of the performer.

The Wajib Itikaf is compulsory to perform. The I’tikaf became wajib when you make a niyyah or vow to God to offer i’tikaf based on a condition.

Itikaf Rules for Female and Male 2020

There are some specific rules that one should follow to perform Itikaf.

Women are also allowed to perform i’tikaf in their homes. However married women need the permission of their husbands before starting Itikaf. She should pick a proper place in her home and make it separate where other people can’t come.

Females should take care of their menstrual days because if she gets her menstrual days during i’tikaf then her i’tikaf we be no more valid and she has to offer the Qaeda for it.

When she became clean she should do one-day i’tikaf from sunset to the next sunset.