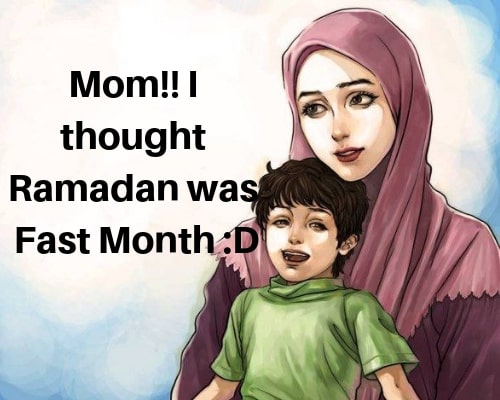 We Muslims are a funny community. At Ramzan, we share some funny Ramadan Jokes with our family members in English, Urdu, and Hindi. We like to lighten our day and nights with tiny bits and pieces of humour here and there and on various occasions. Be it an Eid or the Ramadan, every year Muslims come up with a whole new batch of freshly made comics, memes, and simple 2-lined jokes to add fun to the already blessed days and nights of religious festivity.

While it is undoubtedly a month of religious importance for the Muslims and they hold a special reverence for, Ramadan each year is bound to come with some light humour taking the whole internet by storm from Muslims. It is impossible to surf the internet in this month without coming across various Ramadan Jokes in English, Ramadan Jokes pictures, and various other memes in other languages showing the fun side attached to this Holy month.

There is nothing wrong or immoral in laughing out loud to lighten your hearts. In months like Ramadan, jokes about feeling the hunger or anxiousness about waiting for the Maghrib prayers automatically start sounding funnier than ever.

Therefore, here below we have complied, besides Ramadan Jokes in English, Urdu and in Hindi to spread some smiles on your lips. Don’t worry about your inability towards comprehending the languages, we have translated all the jokes in the English language to make it easy for you to comprehend.

Waiting for the Maghrib Azan Can be hard (English Joke)

Every year, during Ramadan, we come across various tweets or Ramadan Jokes pictures expressing how the hungry Muslims feel while eagerly waiting for the sun to set. While all these jokes are hilarious beyond description, one which can make anyone go rolling on their stomachs is the one below:

During one hot Ramadan afternoon, a guy called up a radio station and they asked him “what song do u want to be played” he said in a feeble voice saying “please play the Maghrib Adhaan” 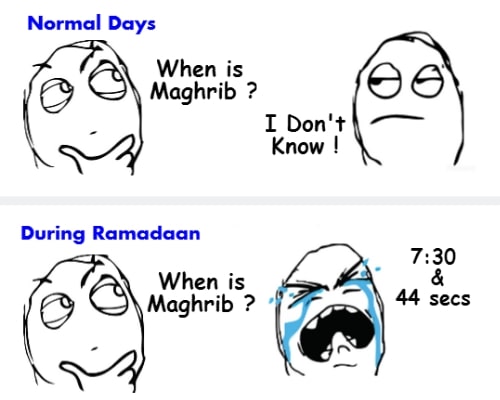 We have seen that people who eat a lot are always mocked by the other due to this habit of them. However, in Ramadan, the jokes about eating too much have their own separate fan base. There are many Ramadan Jokes In Urdu about people eating too much in the Sahur and Iftars.

The best one of those is a one-liner warning posted on a restaurant’s wall which said: “Lovely fasting Muslim brothers and sisters, please consider the iftar as iftar and not as a reception food. You’ll get it every day for the next 28 days.” 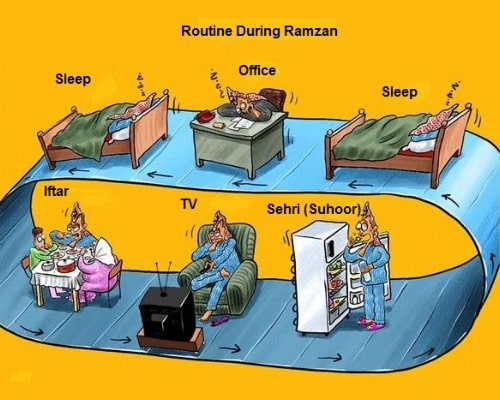 Most of the jokes we see about the Husband and Wife are usually roasting the poor ladies in one way or the other. Some show wives as dumb or fools while the other shows them being that cruel lady of the house whose husband cannot even breathe without her consent. Ramadan usually turns the tables in this context. Let us have a look at this most famous Ramadan Jokes in Hindi talking about a husband who thinks he can fool anyone. 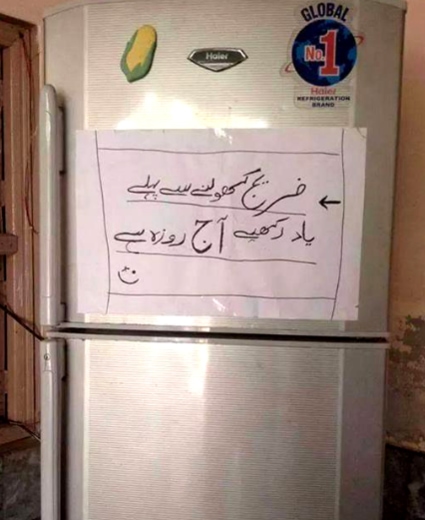 Wife to husband: Will you fast today?

Wife: will you say your prayers?

Husband: Difficult but I will try.

Wife: Will you do Iftar?

Husband: obviously I will. Do you think I am a disbeliever? 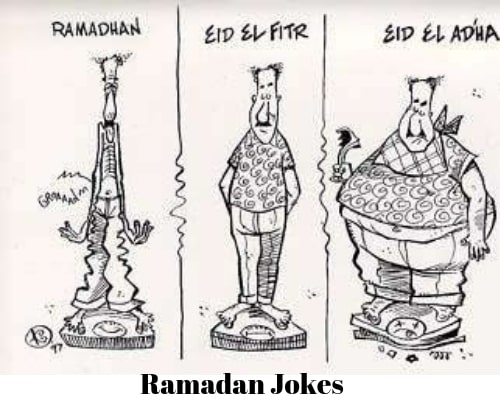 The One About an Innocent Villager (Jokes Picture)

This is one hell of a joke. An innocent villager was told by the Imam of his mosque that every supplication he makes before the iftar in Ramadan will be accepted by Allah. He prayed on the first day of fasting “O Allah, make tomorrow’s day the Eid’s day.” 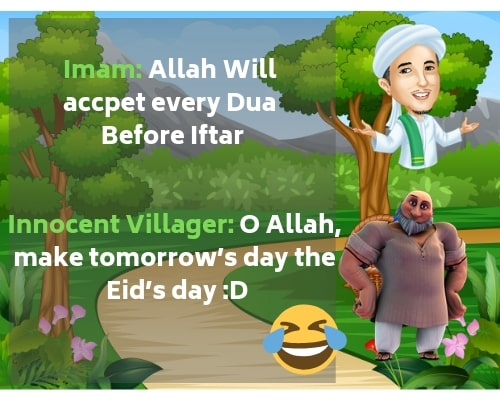 The Pun about businessmen

There is a lot of shopping done during Ramadan and it is a very beneficial month for those who have their own businesses. This makes these businessmen a central figure in many puns and jokes especially during this blessed month when they make a lot of money. One joke tells about how a businessman went for an eye check-up right in the start of Ramadan and the doctor tells him it is nothing except for a high-intensity sparkle blinding his eyes. The sparkle, according to the eye specialist, comes from the happiness of a lot of money being made by the businessman during Ramadan. 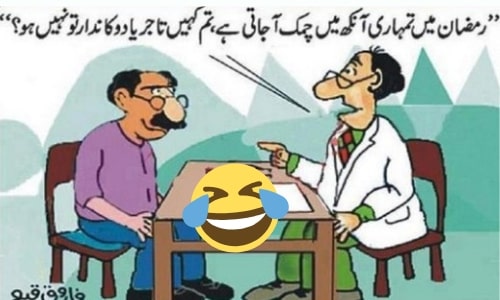 Everyone knows when its Time For Maghrib

The most beautiful thing about Ramadan is the wait we do all day for the Imam to say the very first line of the Maghrib Adhan. There is a funny story which talks about a guy who has no idea about the exact time of Maghrib Adhan during the entire year. However, when he is asked for the Maghrib ’s time in Ramadan, he says 7:15 Pm pass 33.56 seconds. 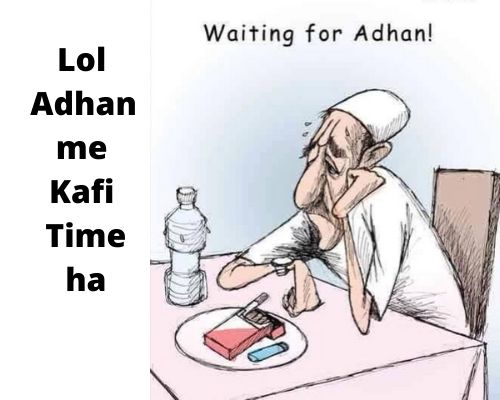 The one About Mother in law

A guys mother -in- law would come to stay with him and his wife every Ramadan and was never fasting. One day this fasting man was very hungry and saw his mother in law was eating in front of him. He angrily got up and went out for a stroll. On his way, he saw that a lot of people were gathered outside a house. He stopped there to see as to why so many people were out there in the hot noon of Ramadan. He asked a man who replied that a man’s camel kicked his mother-in-law and she died. Listening to this, the man ran quickly to the man and asked him to sale his camel to him and take as much money as he wants.

Ramadan never stops us Muslims to have fun. All you need to take care of while cracking Ramadan jokes is that the joke is decent. We all are gifted with the ability to create humorous stuff and are also aware of what can hurt the emotions of a certain religious group or a specific person. Just spread smiles without offending others this Ramadan.